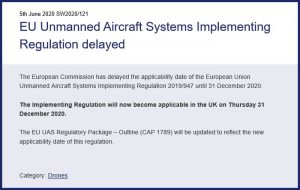 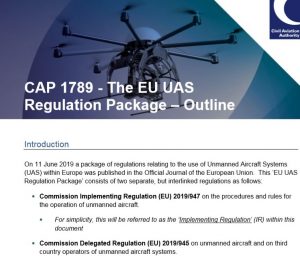 Today sees the announcement of a further delay predicted in this blog.  The EU UAS Implementing Regulation has now been officially pushed back to the 31st December 2020.  That’s the same day that the UK Government has stated it will be pulling out of both the EU and EASA.

It’s interesting to see that 6 days after this blog was originally posted, the CAA released this statement:

We are working closely with the Government and European colleagues to delay the applicability of the forthcoming EU UAS Implementing Regulation to beyond the original 1 July 2020. The length of this delay is being finalised but will be at least a number of months.

We have already incorporated several amendments to the EU UAS Implementing Regulation into an updated edition of CAP 1789 ‘The EU UAS Regulation Package – Outline.’ We will publish this at the appropriate time and when the applicability dates can be included.

We absolutely commit to informing the community as soon as we have any new information on timescales for introduction so please assume this remains the current information until we advise otherwise.”

The announced delay will be “a number of months”.  We also know from other statements that there is significant additional pressure on the SUA department’s resources from other aspects of COVID-19.  Prime among these is the need to support OSC applications by operators offering support to the emergency services and other public bodies during the crisis.  We also know that pressure is being exerted by industry bodies pushing for the ability to spray disinfecting/anti-viral agents by drone.

As with the virus itself it is very difficult to foresee exactly when this pressure will be eased.  Lock-down measures are certainly not going to be changed for a while and it is easy to foresee them continuing for several more weeks or even months.  Then ask yourself if anybody in Government will be minded to concentrate on an amendment to the Air Navigation Order when they finally return to Parliament.

In my opinion, the longer the delay, the less chance that EASA will be implemented in the UK in the way originally envisaged.  CAA’s statement sort of hints at that as the update to CAP1789 was originally expected to be issued in late Feb to mid March.  This implies it should have been ready for issue as COVID struck.  Was there any real need to delay issue if the only changes are applicability dates?   My suspicion (and we are playing Nostadamus here) is that when CAP1789 is finally released it will have far more changes than the applicability dates.

I quite enjoy those “prediction” programmes on the radio and TV every new year so it’s fun to look forward at possible scenarios during these uncertain times. There are no guarantees issued here…it’s more of a thought experiment..but it ends with some advice….

If you don’t already know that the drone laws are due to change on 1st July this year then you’ve either stumbled on this blog by mistake or you’ve been trapped under a rock. All operators should be aware of these changes as they will directly impact your business in just 3 months time…or will they?

COVID-19 has to place a question mark against EASA. Is there evidence for this?

Well, the only hard evidence is Grant Shapps’ recent statement, made on a visit to the US that Britain will leave EASA at the end of December 2020 as part of Brexit. Mr Shapps was talking about the whole EASA arrangement, but even then, the announcement in itself made no difference whatsoever to the situation with drones. Why not? Because the new drone rules would have to be implemented on July 1st regardless . The UK is still in the transitional period where it has to follow EU rules…so EASA comes in, right?

Well, COVID-19 may have made things interesting… because parliament is now in recess. Although this doesn’t mean it is paralysed, it is clearly going to be a) less efficient, and b) far less interesting is sorting things like arcane drone laws…particularly when there is a perfectly adequate system in place that everybody understands.

For EASA to be brought into play effectively we will need a revised Air Navigation Order, all NQE’s that want to transform to RAEs to be audited by the CAA and I guess, a way for individuals to take the courses that will be offered.

None of these is guaranteed in the current climate and, if Grant Shapps’ throwaway comment wasn’t just a statement of our negotiating position, then No. 10 probably won’t be too concerned if any legislation is delayed. The fight against COVID-19 would make a perfect excuse.

So if not EASA then what?

According to some sources the CAA have never been happy with the concept of 5m take off and landing clearances for drones that don’t yet exist. Too much can go wrong and even a minor accident involving this technology is likely to be blown out of all proportions by the anti-drone UK press.

The CAA is also very keen on the concept of operations manuals, so the requirement for these is unlikely to change for anything other than the lowest risk operations.

Many operators believe that the current 30/50m clearances of a Standard Permission are too high and make many operations difficult to complete legally. So maybe with a new generation of drones we will see a welcome relaxing of these restrictions, possibly with some additional pilot training from a qualified body. They could even borrow some of the standard scenarios from EASA and continue with the explain to put a training wrapper around these.

Many operators are struggling financially because of the widespread reduction in business and media activity. Those that survive will have to look carefully at how they invest for the future. The choices are wide but probably come down to spending on equipment (to comply with a possible non-existent A2 CofC), training, marketing or improved permissions.

The one thing I’m sure of is that if DJI came out with a C2 compliant Inspire 3 tomorrow, unless it had significant improvements demanded by clients then I would pocket the money and spend it elsewhere until the legislative framework sorts itself out for certain.

Eyeup provide a range of OSC solutions to small unmanned aircraft operators from white label services, through OSC training to bespoke tailored OSC’s. All solutions involve working closely with the operator aimed at obtaining exemptions matched to your requirements and experience.