The River Runneth Under.

The river runneth under.

What’s in a name?

The river Mole probably gets its name from a back-formation of the name Molesey, which is the settlement at which it joins the river Thames.  How much more romantic though, to think of its likeness to the small ground-dwelling rodent, as the river also boasts a burrowing habit.
Between the towns of Dorking and Leatherhead the underlying chalk contains a number of ‘swallow holes’. These lead to the surface flow actually reducing through this section of the river as much of the volume of water travels underground, only re-surfacing when forced to do so by the appearance of the layer of London clay starting near Leatherhead.
In particularly hot and dry years, this habit exhibits itself in a strange phenomenon, when a stretch of the river before Leatherhead dries up completely on the surface. It happened in the drought year 1976 and this week, after a couple of weeks of increasing July temperatures it has happened again.
Stories abound of the treasures that have been hidden in the swallow-holes over the years by highwaymen and the like. There may be some truth to these stories but the truth is probably more mundane. 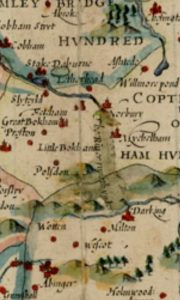 I went walking on the river bed this morning, not far from Leatherhead. I found the bare riverbed, along with a few large stagnant puddles being eyed-up by the local dragonfly population.
It is something of a privilege to be able to walk, dry-footed, where the fishes usually play. To peer beneath the scoured out roots of an ancient tree where a pike should be laying in wait for its prey.
At the same time it feels slightly odd and uncomfortable, a throwback to childhood entreaties not to play in the river or go out of your depth. There is no risk here. The river won’t suddenly reappear without warning and wash me tumbling downstream to my doom. But something primal tells me that I am in a ‘wrong’ place, somewhere man shouldn’t be.
So I potter, shooting a bit of video for posterity and discovering the desiccated claws of a dead crayfish that didn’t heed the warnings of the receding waters in time.  It isn’t until I return to pack up my kit that I notice it. To be honest I don’t know how I had missed it as once spotted it was obvious…impossible to unsee.
Buried, on its side, and become one with the bed of the river, a discarded bike. Not ancient, but there long enough that almost all of its spokes have rusted completely away, just a few gamely holding the back wheel almost together. One plastic pedal gamely reaches for what would normally be the surface, this victim of a Saturday night “get me home” theft. Better, in the eyes of the thief, flung into the river when close to home rather than reunited with its owner.
Bicycles are strange objects. They are freedom-givers to children and a lifeline to many workers. They can be a special treasure to some while being taken for granted by others, until they disappear and can no longer fulfil their duty.  So a fallen and lost bike deserves respect. This one has been recorded for posterity in two positions.

The first as found. 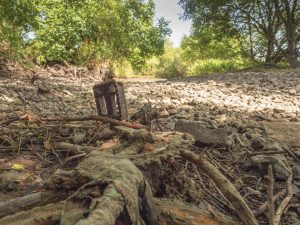 The second, lifted and supported as though about to take its final ride down the dry, bumpy road to Molesey. 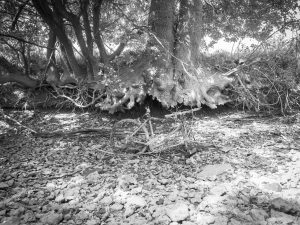 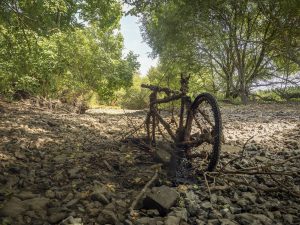 Old and abandoned cycles of the world…we salute you.

Category: Left field - nothing to do with dronesBy Graham Degg17th July 2022Leave a comment