A Guide to NOT Buying the DJI Mini 3 Pro

Why I’m not buying the DJI Mini 3 Pro

Update.  As of 18th August 2022, The Mavic 3 has achieved the first C1 marking for use in the European Economic Area only (so no UK C1 mark at the moment).  However, see my next predictive blog here!

I’m tempted.  Yes, I’m so tempted to go and buy the DJI Mini 3 Pro.  I’ve got the money in the bank and it looks like a staggering amount of technology wrapped up in a tiny 249g package…seriously, how do they do that?!

But I’m holding off, certainly for now, despite having a trip to the US planned where I could pick up the full Pro Flymore package for under £800.  What is stopping me?

Currently I own a Parrot Anafi.  There is a key similarity with the Mini 3 in the form of the upward facing camera.  Although the Anafi can point its camera directly up, while the Mini 3 is limited to 60 degrees, the Mini would serve for every job I’ve done where this trick has been required.  The Anafi shoots well enough and its 20mp camera provides plenty of detail for the purpose providing the light is good.  Yes, it’s clunky but once you get used to its quirks, it’s quite fun to use.

I can use the Anafi with my A2CofC in almost any circumstance the Mini 2 could be used.  All I do is avoid intentional overflight which is very simple on an inspection imaging job.

You probably don’t have an Anafi in your fleet, but you are probably rocking a Mini 2 and don’t need to bother with the A2CofC…to all intents and purposes we are in the same boat.

I can see already that many operators are busy selling their Mini 2s, old Mavic Pros and even Air 2s and the like so they can finance a Mini 3.  I’m not bothering yet.

Well, it’s the opportunity cost thing.  Buying the Mini 3 will take some money out of the bank which can either sit there as a buffer for uncertain times ahead or could be used to finance some marketing activity.  In my case it will do the former.  The uncertain times ahead relate to the potential for release of another drone… in this case the Mavic 3.

“But”, I hear you cry, “the Mavic 3 is already released”.  Of course it is.  But the one that’s released isn’t the version I want.  I’m after the one waiting in the wings.  I want it because I think it may be C1 marked.

What leads me to believe this?  There are a couple of clues.

The first is the weight.  Very close to its initial release, there were some leaked specs flying around giving a weight of just over 900g.  This would force any C marked drone into C2 if there is no form of parachute fitted to reduce the impact energy below 80J…and that isn’t DJI’s style.  However, a few days later the drone was officially launched with the weight of the heavier Cine version just below the magic 900g.

Some have argued that a drone with a  “flying weight” of 899g can’t possibly have a declared Maximum Take-Off Mass (MTOM) of less than 900g.  The argument is that the drone will always be capable of carrying some additional weight and therefore it can be flown safely above 900g.

But the MTOM is a figure defined by the manufacturer which can use whatever safety margins it wants in its calculations.  Just look at the maximum wind rating of the Anafi which is only 1.5kmh below the maximum speed of the drone.

Meanwhile DJI tend to half the maximum speed and use that as a conservative safety margin…and that becomes a legal figure which can be used to prosecute anybody flying on an “inappropriately” windy day.

But surely DJI itself sell accessories that push the M3 over the 900g limit and therefore destroys this argument.  Nope.  They will sell you a set of prop guards that will clearly take you well over the magic weight.  But these are not sold in the UK and I suspect not in the EU.

Finally, let’s look at the maximum speed.  In the rest of the world the drone will achieve 21m/s.  IN the EU, I’m afraid you are limited to 19m/s.  Well, would you believe that the maximum speed for a C1 drone is 19m/s…what a coincidence.  It seems strange that a company pushing a product would deliberately hamper it without a legal requirement to do so.

My thought is that the Mavic 3 is DJI’s first “C” or “UK” marked aircraft.  It just happened that it was ready to launch (though some would argue it wasn’t nearly ready enough) before the EU and UK systems were ready to assess and certify it. 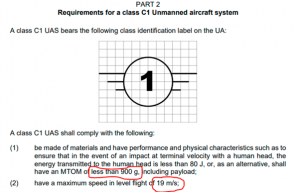 Back to my pile of cash.  Yes, I will need more than the price of a Mini 3 to buy a Mavic 3.  But quality counts and the output from the Mavic 3 is always going to be hands down better than the Mini.  It is rumoured that DJI is planning a relaunch of the Mavic 3 to counter some of the technical issues experienced by early adopters, GNSS lock being the most obvious.

So that’s why I’m not buying the Mini 3 Pro.  For the time being at least I am putting business head before heart and seeing what develops with DJI’s higher level offerings.  A good C1 drone will always knock the spots off a good C0 drone, because it’s got 650g more weight to play with.  The competency requirements are minimal (pass the online FlyerID test) and the restrictions are so identical to the sub-250g category as to be laughable.

So, when DJI finally come out with their C1 offering, expect every professional operator on the continent and in the UK to want one.  Some will have the money ready and waiting.  Others will have to sell their Mini 3 first!

Category: Advice for operatorsBy Graham Degg11th May 2022Leave a comment